Donald Trump calls for the ban for Muslims to enter the US, this is what happens next

There are however, consequences when you say things like that.

Clearly, if you don't like Donald Trump and what he represents, you can also boycott all Trump Products.

He owns hotels and other products, you can check them out here.

Most of them are quite easy to recognize as you can just avoid "Trump" Products because they have his name on them. He is involved in some other businesses which you can find here on Wikipedia.

Sadly, with his wealth and reach, it is very hard to boycott everything he owns, but we can all try to do so until more businesses will avoid dealing with his brands.

5 things to know about 99% of Zuckberg's wealth

Facebook is going out of its way to emphasize that CEO Mark Zuckerberg's pledge to give away 99% of his company shares is not about charity, but philanthropy.

The initiative is set up as an LLC, not as a charitable trust. This means that the LLC can do whatever it wants, including private investments generating profits. And yes, it can retain its profits and not give it to charity.

While charity will certainly be one of the money’s destinations, it will be far from the only one. The money, according to a Facebook SEC filing, will go to “philanthropic, public advocacy, and other activities for the public good.”

If you think Mark Zuckerberg is giving up 99% of his US$45B to Charity, you are wrong. Many rich people do this, and let me explain to you why they are doing this. It is not out of the kindness of their hearts or Altriusm, but rather, it makes economic sense.

This is a troubling trend and most of the rich do not pay much % of tax as part of their salaries. And yes, if Mark Zuckerberg puts his money into this initiative, 99% of the money will not need to pay capital gains tax.

So in simple terms, "Mark Zuckerberg will transfer ownership of his Facebook stock without paying capital gains taxes." His kids will also have everything, untouched by estate taxes.


"The Chan Zuckerberg Initiative will pursue its mission by funding non-profit organizations, making private investments and participating in policy debates, in each case with the goal of generating positive impact in areas of great need,” it said. “Any profits from investments in companies will be used to fund additional work to advance the mission.” (From Buzzfeeds)


3) This is not happening immediately.

The Facebook founder is not giving away 99% of his Facebook shares all at once. He will be doing it over the course of the rest of his life.


4) Moving money to his own organization

Rather than give to existing nonprofits, business leaders are increasingly siphoning their fortune into their own organizations.

"Just because you were successful in the for-profit world doesn’t mean that nonprofits are a bunch of bleeding-heart idiots that need you to come in and show them how it’s done,” Ken Berger, the managing director of the social-good data service Algorhythm.

With this move, Zuckerberg no longer need to depend on tax benefits, he is able to give up his stocks, pay less taxes and remain in power of his company.

So is this a good or bad thing?

It is too early to tell, but you can be sure that this is a smart thing for anyone that rich to do. 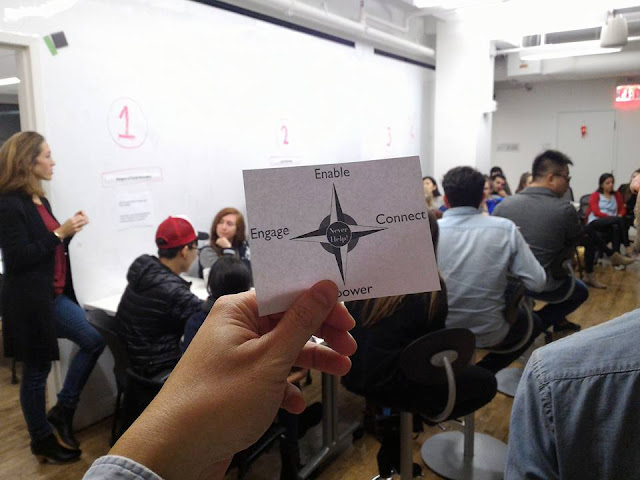 I spoke at School of Visual Arts: Design for Social Innovation on the topic, and the students applied it on the current events -- Syrian Refugee Crisis.

It was very interesting to see that these students had many good ideas. One of them was re-framing what we call them. These refugees are not helpless people. They are moms, teachers, doctors, carpenters, etc. Instead of looking at them at a liability, these survivors can be a valuable resource that can fill jobs which no one want to take, and all they want is an opportunity and a new place they can call home.

Marginalized communities are not helpless and they are not a liability. Communities can help themselves. If we want to support them, all we got to do is engage, enable, empower and connect.