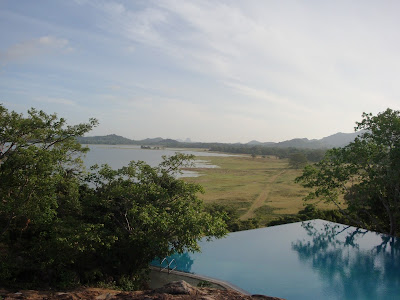 "Wow, where did the lake come from?" Tupi shouted as he looked out the window. The view was simply breadth taking. The tranquility of the lake and beauty of nature was all around the hotel. It was as though the hotel was carved into a rock and covered in greenery.

Tupi walk around and viewed the sunrise. He felt invigorated and went for breakfast where he met Jenny. "Its getting late, you need to hurry up with breakfast and we need to leave soon." Jenny said.

Tupi was shocked. Its barely 6:30am and it was late? Tupi hurried with his breakfast and was ready to check out at 7am. The drive out was beautiful. It was pitch black the night before and Tupi did not see anything at all.

The drive was very scenic and within 30 minutes the van arrived at the Dambulla Cave Temple. "Doing all the touristy bits and then a long ride towards Jaffna." Jenny said and Tupi hiked up towards the cave temples

Tupi saw some monkeys which followed him along the way and was bored as Tupi ignored them. It was quite a hike, and Tupi managed to reach the top.

The caves had many Buddha statues inside with the oldest ones more than 1,000 years old. There were 5 caves and the largest sleeping Buddha was 14m tall.

The view from the top of the hill was nice and Tupi was impressed he made it up so easily. He felt refreshed and after a drink of water, Tupi headed down and the journey continued.

It was late morning before Tupi visited Anuradhapura, Tupi had never been to an ancient ruin and this place simple blew his mind. It was quite vast and the van took Tupi slowly around to view the Stupa and the other ruin sites. It was a great archaeological find and Tupi took out his camera and captured some of the memorable sites.

The van then took everyone out of the ruins into the city around it where they had lunch and proceeded to Jaffna.
Posted by Iron Bowl at 10:36 AM