How has the plastic ban affected me in Boston. 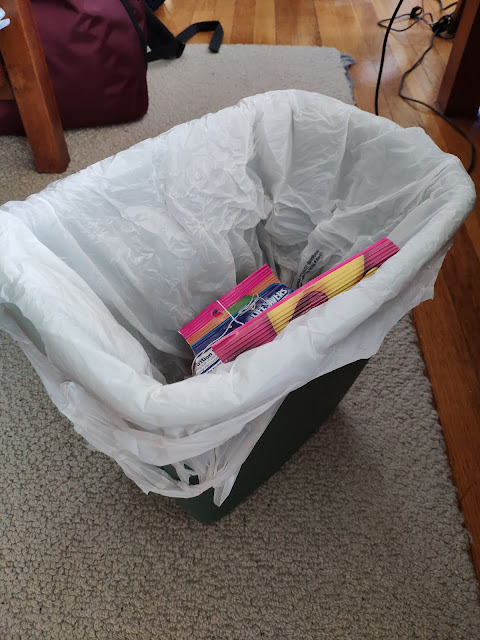 Like many people, I use the plastic bags I get from the supermarkets to bag my trash. They seemed to be an important part of my waste management at home. I do support the single use plastic ban and was wondering how it would affect me. 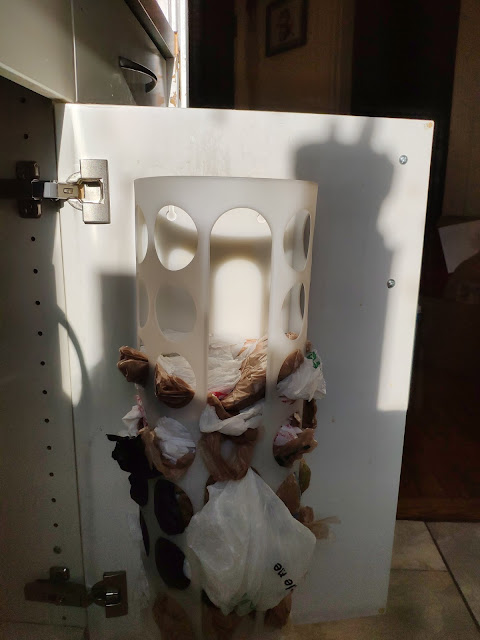 Normally, I would try to bring my own shopping bag to buy groceries, but even with a plastic bag in my backpack, in my motorcycle / car, I usually end up with more plastic bags.

So after the ban on Dec 14, 2018, I have been to the supermarket several times and I did not bring my own bag at least once a week. However, I just decided to put what I can in my pockets after paying and carrying the remaining items on my hands.

The fee for the plastic bag was $0.10. While not much, mentally, I was not willing to shell out more money. I also realize that this made the hoard of plastic bags in my cupboard decrease significantly as I was bringing less home.

When I start to realize that I may have to pay for trash bags at some point of time, I start to sort out my trash more efficiently. I sort my styrofoam trays according to size, I fold my plastic covers and other waste to compress them. When using eggs, I stack my eggshells into each other. When I'm cutting vegetables or removing shells, bones and other food waste, I now try to consolidate the waste and compact it to use less plastic.

Overall, I would saw it will probably cost you more if you don't bring your own bags, or have more inconveniences created when you need to carry groceries in your hands without a plastic bag.

Perhaps it is a little price you have to pay, and it may prove that is may be an essential to change our behaviors.

Money and the need for Enabling currencies

Money today is generally used as a mode of payment. Money also encourages competition and creates a need for endless growth (interest).

It works for many of us and got us through the industrial age, however, there are a lot of problems that are caused by our current economic system. Concentration of wealth is happening and major  religions that were against charging interest did not seem to bother about it now, Income redistribution schemes have all failed. Welfare system and progressive tax are criticized for being effective.

With the coming of the 4th Industrial Age, the worsening of climate change, explosion in population and the ageing population, there will be a lot more problems faced, and the pollution caused may make it harder for future generations to survive.

Enabling currencies / Complementary tokens can play a big role to solve many of today's problems. A cooperative currency can be created to try to address some of these problems.

In a job scarce future, a work enabling currency can be a complementary currency instead of welfare. It can be used a tool to buffer a region from shocks caused by failures in the money system.


Where there are no jobs, people can still work to contribute to society and they can be rewarded by tokens.

The role of the tokens can also be used like Barter+, or it can be stored as work hours which can be exchanged for favors and other tasks in the gift economy. (e.g. Looking after a pet for a day in Boston can earn you tokens which you can exchange for someone to accompany your parents to the doctor for a medical checkup and back.)

Time can be spent on community building activities instead of being wasted. The community can be encouraged to cooperate and show reciprocity in places where money is scarce.

Tokens can also be given freely without transaction fees, contributing to the gift economy.

People can take up loans of the tokens to start small businesses and people contributing can trade the tokens they collect for the products and services.

The word work is more general than “job” – whereas “job” is a specific occupation/profession, “work” refers to general efforts and activities done to accomplish a goal. “Work” can be done both inside an official job and outside a job!

The word job is more recent, dates from the industrial age, whereas work is an old word.

In the coming of the 4th industrial age, climate change and biodiversity extinction, explosion of population, increase in human lifespan (Silver Tsunami) and financial instability, there is enough work for everybody, but it may not be the same for jobs.


Lets put some definition:
Job - activity that people do to obtain money -- to make a living.
Work - activity that is performed for its own sake, for pleasure derived from giving, or the passion expressed for the activity itself.

If you did not need the money, would you still have the job?

If the answer  is yes. Then your job is also your work, and you are the minority in this world.

There is a connection to public health.

Evidence points that jobs without meaning makes you sick, and even kill you. I have a few friends that died this year. Friends that decided to grind and work hard to earn more money. One of them owns several houses but decided that it was hard to give up a high paying job and needed to work hard to maintain the same lifestyle until he collapsed and never woke up again. Another friend simply works in a stressful environment everyday and constantly falls ill, just to pay bills and get by, and eventually, his poor health caught up with him.

There are several research done to show that medical services have little effect on national health levels. Instead, what influences health is a work situation where people are in control of their lives.

The problem with work is finding someone to pay money for it. i.e. making it a paid job as well. The scarcity in jobs make money scarce as well. But does money need to remain scarce?

With the coming of the 4th industrial revolution, will unemployment be just a blue collar thing?

No! Large corporation worldwide are shedding people and having "strategic layoffs" Even profitable companies are streamlining to be more efficient and this will be a trend and becoming new norm, and no jobs are safe.

As we progress in technology and processes, corporations may improve its competitiveness through downsizing. It also has economic consequences. as people buy less when they lose their jobs, but in Third World Countries, the middle class expands and market shifts there.

When economic irrelevance occurs, it creates depression in the population. "We don't need what they have and they can't buy what we sell."

Depression may become epidemic and you get a society that cares only for themselves. Violent rage and lashing out randomly and the majority of the society tries to blame others and find scapegoats for the problems.

Fear by the majority

The next thing that is on everyone's mind is -- fear.

People start to fear things different from them, and this creates political polarization. In many countries, political leaders cannot solve the problems as they follow traditional ways.

The traditional left-right debate is an inheritance of the Industrial Age economic framework. Debate had to do with private or public ownership of the 'means of production'; i.e. factories and machines.

What is missing is always -- money. In a poorer community, there is a lot of work to be done, and people are willing to do it, but who will pay for it?

Interestingly, with the fear, the population also turns to high nationalism, and we have seen the effects of this during WWII.