Religion is often a good thing...

“Each religion has helped mankind. Paganism increased in man the light of beauty, the largeness and height of his life, his aim at a many-sided perfection; Christianity gave him some vision of divine love and charity; Buddhism has shown him a noble way to be wiser, gentler, purer, Judaism and Islam how to be religiously faithful in action and zealously devoted to God; Hinduism has opened to him the largest and profoundest spiritual possibilities. “ 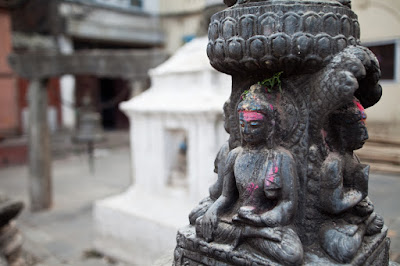 Religion has often been a vehicle for intolerance and fundamentalism; religion has been used as an excuse for persecution and war. Religions and traditions are also used as a way for some people to get rich. Even "selfless service" can be abused by some for their benefits.

In every religion, the religious people can be exploited. “Mercy release,” an ancient ritual in which Buddhists free captive animals to generate positive karma through an act of kindness, creates a demand for animals to be bought and released. When there is profits to be made, greed will drive people to so things. A tradition that once encouraged the spontaneous release of doomed animals has today become a commercial enterprise in which people buy animals specifically to release them. The process may injure—or even kill—them.

Hundreds of millions of animals are released each year in this practice. If you have sinned, you can release animals to "negate" the evil acts. “The bigger the crime, the bigger the need to release a more exotic animal to get more bonus points.”

Today, this practice is becoming a big problem. Animals are trapped, kept in appalling conditions, then released and often trapped again. Many animals die during the capture or transportation, and others die because they were released in unsuitable environment. Releasing a fresh water terrapin into the ocean will most definitely kill it.

By releasing alien species into the environment, people unwittingly can wreak havoc on ecosystems. Turtles, because of their longevity, are a favorite species to release, but many foreign species of turtles have major impact on local species.

In the aftermath of many disasters, I see religious groups donate canned food, clothes, blankets and bottled water. Sadly, most donated materials which are not sorted properly will cause everything to be wasted. Yet in the face of disaster, some of these so called religious people still donate soiled clothing and expired food. In the best case scenario, clean clothes, canned food and bottled water are sent. In the field, these items do get to the survivors, however, the NGOs that bring it there do not have time to sort through clothing and blankets.

Canned food and bottled water can easily create a second disaster -- waste management. Many disaster areas don't have the immediate ability to recycle and the discarded containers in the open will breed mosquitoes which may cause other health issues. I've seen canned food and bottled water pile up, easily 2 meters high, filling 6 soccer fields in a short period of a week for a population of 10,000 people.

Just like Facebook "likes", I've not seen "Prayers" that were sent having much of an impact to any survivors after a disaster. When there are profits to be made, man will find ways to "game the system" and profit from religious activities. And even "selfless giving" and become voluntourism.

So what can you do to protect yourself?

Having faith and obeying rules without questioning is always a bad thing. Don't be too literal on religious text. Many of it sounds vague and are up to interpretation. Over time, some of the practices may not be relevant anymore, and don't follow it because it is tradition, think about the impact and reason why people are doing it.

I do believe that most religions are inclusive, and open to all, regardless of gender, age or race. When you learn to discriminate against vulnerable or minority groups, then there may be something wrong with the interpretation of your religious leader. (Unless you worship Cthulhu, perfectly fine to discriminate against the lesser gods if you follow the elder ones)

3) Consider impact of your actions.


Think about the impact of your actions. Do not do things because you may consider it "duty" as a good person. Think about what impact does your action create. Donating to a cause may create a dependency on the support. There are more than one way of doing things which may yield the same result, however, some ways may actually cause harm in other things.

The context of many things may have changed. Some religions have lasted centuries, and context is different. Is there any reason to burn incense and joss paper? What impact will you create for mercy release?

There may be other ways which have more impact. Instead of releasing animals, supporting animal conservation and donating to and working with wildlife rehabilitators may be a better option.

Remember, think before you act.