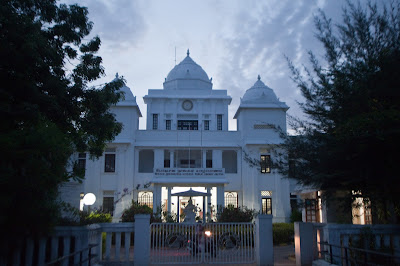 Tupi wanted to see more of Jaffna. There was the old Jaffna fort, some Kayts island, and other abandoned historical buildings. As Tupi was leaving in the evening, he saw Pooja and Pooja was going the same way and they left together. It was a nice walk by the coast as Pooja talked about how Jaffna was like during the war.

Pooja brought Tupi past the clock tower and Tupi saw the old library. "What an interesting building." Tupi said and Pooja stopped Tupi and pointed to a sign. [The Jaffna Library will be open for visitors from 5:00 p.m. to 6:00 p.m] "WHat the hell? 1 hour opening?" Tupi said and Pooja shrugged.

They continued down the road to the Jaffna Fort where Pooja met her sister. Her sister had 5 young kids and was waiting near the old fortress. "Wow. 5 kids? Were they all adopted?" Tupi joked and Pooja nodded her head. "Wait, what? She adopted all of them?"

"Is she a volunteer too?" Tupi asked.

"No more, all her kids were out." Pooja said.

Tupi was confused. "So, she adopted all her kids? And she stopped volunteering?"

"All her kids?" Tupi asked as though Pooja did not understand him.

"Yes, those were her kids." Pooja said.

"And your kids?" Tupi asked.

There was a long silence and Pooja and her sister walked away. Tupi was not sure what happened and was rather disturbed. Then he walked to the fortress. "Awww great." Tupi said as he looked at the sign and his watch. "Opening hours 8am - 6pm." And Tupi shook his head as his watch displayed 6:30pm. "Why is everything closed?" Tupi muttered and walked towards the long bridge and enjoyed the nice sunset.
Posted by Iron Bowl at 12:57 PM